Inspired by Dounia Large's post in this fortnight's paperartsy dark to light challenge, I decided to have a go at pulling the inks through from a dark to light layer like she did. I started with a piece of black card and sprayed some dylusions inks on to it. When that had dried I painted over the ink with some eggplant fresco paint. When that was finally dry I cut it into 2 pieces and on one piece used a stencil and some modelling paste to create the latticed background and on the other I stamped some Lynne Brown paperartsy stamps in white gesso. As you can see both mediums pulled the inks through from the layer below but I love the almost tiger-print pattern I got on the leaves and flower from the gesso. It was harder to stamp the sentiment with gesso as it kept running into the crevices but I used a white gel pen to create 'shadows and it looks better IRL than it does in the photo but it had to do as I didn't have anything else light to stamp it with. I then finished it off with some metal springs which you can just see if you look carefully! 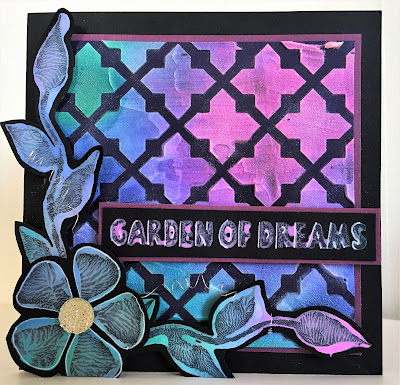